The ‘Player of the Month’ award for each team recognises Cubans performing at the peak of their powers. Awards are decided by the manager of each team.

Arnie says of his skipper…

“The midfield maestro was in fine form in January, putting in some outstanding performances for the Baby Blue. A hat-trick against Box Sash FC included a wonder strike that will surely trouble the judges when it comes to goal of the season. Another vintage performance against Putney cemented this months award and the fans hope that his goals propel a late league and cup charge!”

(As an aside, we tried to source a snap of the boy Shardlow on his own but it just wasn’t possible. The lad’s twitter, FB and insta feed is literally just images of him with his bird. Mug.) 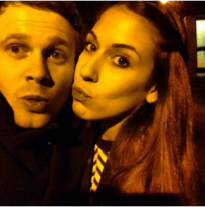 Meanwhile, 1’s Gaffa Ben Mac could not speak highly enough of the industrious central midfielder who continues to be a linchpin for the success of the team…